・Foreword The Japanese People shaped by the Transience of Nature

・Foreword The Japanese People Shaped by the Transience of Nature
By Kotaro Takemura, Chair of the Japan Water Forum

I am writing this essay in late February. I feel spring approaching after a long cold winter. But we have to be beware of the possible return of cold weather. As I suffer from hay fever, I have to be careful of both pollen and catching cold because of chilly weather. It  is a really troublesome season. 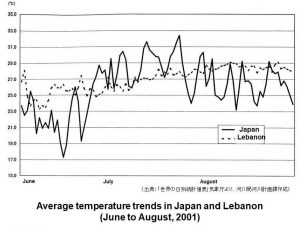 Compared to the relatively small variation in temperature over a three-month period in Lebanon, the temperature in Japan drastically varies over a short period of a few days. To the Lebanese, the Japanese may seem a busy people due to the ever-changing temperature. 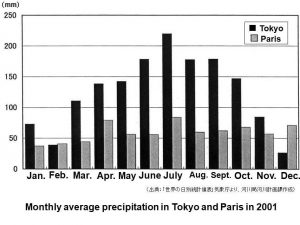 I still remember the Tokai Downpour, which occurred in 2000. Over a period of two days, from September 11 to 12, the Tokai area was ravaged by record torrential rains. Residents of the area lost 700 billion yen overnight. (Picture) Ironically, just before the rains hit, the area had been suffering from a serious drought. When I examined press reports about the drought and torrential rains, I realized that there was only a five-day interval between the dates.

Japan Lacks Principles
The Japanese people, living under ever-changing weather conditions on these islands, have had no choice but to live under the influence of the weather. It is natural events such as earthquakes and meteorological phenomena that control our lives. Even if the Japanese hold up ideals or have specific goals, fickle nature can easily blow away such goals. Ideals, goals, and principles of life are at the core of humankind’s philosophy. However, if nature goes on the offensive and runs wild, philosophies can easily vanish into thin air.

Eternity and Transience
Monotheistic religions originated in arid desert regions covered with sand and rocks. At night, we can see only the moon and stars in a desert. There is nothing and nobody. The desert today remains the same as it was yesterday. The desert has remained the same for decades or centuries and will remain the same even in future centuries. In a desert, we see nothing moving. Moving things signify change. Nothing changes or decays in the desert as there is no movement.

Things that never change or decay will last forever. Therefore, eternity is not just an idea but a reality for the people living in arid regions.

Everywhere on Earth, nature seems to control the human character, way of thinking and culture.

On 25th February 2020, the Asia-Pacific Water Forum (APWF), for which Japan Water Forum acts as its Secretariat, organized the APWF 25th Governing Council Meeting at the Good Wood Park Hotel in Singapore, with support from PUB, Singapore’s National Water Agency.  Because of the concern of the COVID-2019 outbreak, we coordinated an online meeting while minimizing the number of members gathering in Singapore.
The meeting was chaired by Dr. Eduardo Araral, Vice-chair of the Governing Council of the APWF. The meeting participants discussed: 1) The progress of the preparations for the 4th Asia-Pacific Water Summit (4th APWS), to be held on 19-20 October 2020, particularly in terms of the 4th APWS declaration document, other outputs, and parallel thematic sessions; 2) APWF’s annual three priority thematic action plans, and 3) the participation in the thematic development processes of the 9th World Water Forum.

If you wish to post information on our bulletin board, or should you prefer not to receive further JWF News, please contact us.
You can also get in touch regarding subscribing, changes of address, or any other comments or requests.